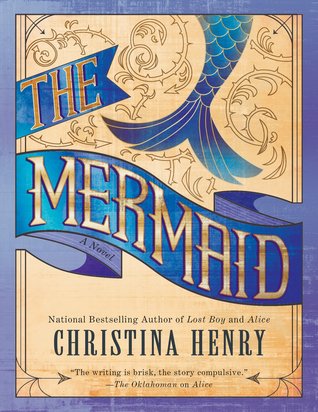 From the author of Lost Boy comes a historical fairy tale about a mermaid who leaves the sea for love and later finds herself in P.T. Barnum’s American Museum as the real Fiji mermaid. However, leaving the museum may be harder than leaving the sea ever was.

Once there was a mermaid who longed to know of more than her ocean home and her people. One day a fisherman trapped her in his net but couldn’t bear to keep her. But his eyes were lonely and caught her more surely than the net, and so she evoked a magic that allowed her to walk upon the shore. The mermaid, Amelia, became his wife, and they lived on a cliff above the ocean for ever so many years, until one day the fisherman rowed out to sea and did not return.

P. T. Barnum was looking for marvelous attractions for his American Museum, and he’d heard a rumor of a mermaid who lived on a cliff by the sea. He wanted to make his fortune, and an attraction like Amelia was just the ticket.

Amelia agreed to play the mermaid for Barnum, and she believes she can leave any time she likes. But Barnum has never given up a money-making scheme in his life, and he’s determined to hold on to his mermaid.

“A bird in a cage still knows it’s in a cage, even if the bars are made of gold.”

There were so many underlying themes to this book that I don’t even know where to begin! First of all, it was not at all what I expected. Christina Henry’s books of the past always struck me as very dark and twisted, where this one was very light with almost a historical fiction feel to it. Obviously the history was twisted to suit the needs of a fictional tale, which is always tough when you are using a REAL historical figure (in this case, PT Barnum).

“He would have been perfectly ordinary except for his manner, which seemed to suck up all the air in the room. There was more of his personality than could fit inside his body, and she could see how he could trample you with that personality.”

Though, not historically accurate, I feel that Christina Henry did use some true elements of Barnum’s personality and just played then up. In this tale we was so focussed on money and notoriety as to almost be cruel, and there was no escaping his grasp if he wanted what you had.

The themes of women’s rights were very prominent in this novel, although I thought it funny that throughout the entire novel Amelia stresses that she doesn’t belong to any man and should have the right to be in her own and take care of herself, and even when told that other women suffer the same fate of being “owned by a man” she only seems to think of herself.

I do think that Henry did a great job of putting into words the desolation that Amelia felt realizing that she would live forever and that loving would just bring about loss after loss as she continued through life alone.

“And though she cursed and wept and pleaded and bargained, the ocean never listened or acknowledged the troubles of one small land-or-sea dweller. The ocean has a rhythm, but it has no heart.”

Pick up a copy now!

CHRISTINA HENRY is the author of the CHRONICLES OF ALICE duology, ALICE and RED QUEEN, a dark and twisted take on Alice’s Adventures in Wonderland, as well as LOST BOY: THE TRUE STORY OF CAPTAIN HOOK, an origin story of Captain Hook from Peter Pan.

She enjoys running long distances, reading anything she can get her hands on and watching movies with samurai, zombies and/or subtitles in her spare time. She lives in Chicago with her husband and son.

8 thoughts on “The Mermaid by Christina Henry”