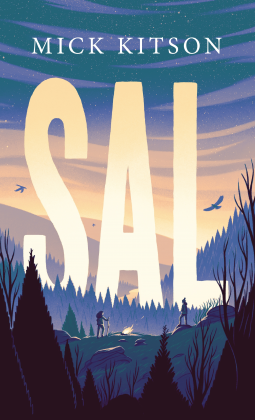 I’d like to thank Netgalley and Canongate Books for allowing me an advanced cooy of this book in exchange for an honest review.

This one was a really tough book to rate… I will warn everyone that it is FULL of triggers.

Sal planned it for almost a year before they ran. She nicked an Ordnance Survey map from the school library. She bought a compass, a Bear Grylls knife, waterproofs and a first aid kit from Amazon using credit cards she’d robbed. She read the SAS Survival Handbook and watched loads of YouTube videos.

And now Sal knows a lot of stuff. Like how to build a shelter and start a fire. How to estimate distances, snare rabbits and shoot an airgun. And how to protect her sister, Peppa. Because Peppa is ten, which is how old Sal was when Robert started on her.

Told in Sal’s distinctive voice, and filled with the silent, dizzying beauty of rural Scotland, Sal is a disturbing, uplifting story of survival, of the kindness of strangers, and the irrepressible power of sisterly love; a love that can lead us to do extraordinary and unimaginable things.

A story of two young girls Sal (13) and Peppa (10) who are hiding in the wilderness from the Police (Polis to them) after Sal kills their mother’s boyfriend after years of abuse.

It is a dark tale of abuse, alcoholism, and the lengths Sal will go through to keep her sister safe. It reminded me of “My Side of the Mountain” and the descriptions of surviving in the wilderness were very authentic. I think that I would have rated it higher if the content weren’t so uncomfortable, so please, check it out for yourself.

All of the characters are very well written. Everyone will fall in love with Peppa’s unflagging spirit and spunk, she’s definitely a riot! And Sal’s unwavering strength and intelligence.

I was unsure of the narrative. It is told though the words of Sal, so it is full of slang and run-on sentences, which is realistic to being written by someone so young, but at the same time could get tedious and off track. It was sometimes hard to follow the changes in thought pattern. She tends to repeat herself and overlap her thoughts numerous times.

“When I woke up I started to worry straight away that it was four days since we ran and this was the fourth day here and they would definitely be looking for us all over. I think it was our fourth day here. I think they would’ve found Maw in the room by now and she had a phone so she could phone out. But the room was locked from the outside and the key was on the carpet and there was no way she could’ve killed Robert and then locked herself in there from the outside so that proved she didn’t do it. And they would’ve found Robert on my bed and all the blood from his throat where I stabbed him three times. And blood up the wall too, on the wallpaper with monkeys on it. And Peppa gone too and her room just normal. They didn’t know about the school uniforms we wore or the rucksack or the backpack Peppa carried or the hockey stick case with the gun and the rod in it, so if they looked for things missing they wouldn’t know what was and wasn’t there. I knew what was there and what we’d taken but the polis and social workers wouldn’t know that. They’d find my T-shirt and jeans and knickers with Robert’s blood all over them in the washing in the bathroom so they’d know it was me. They’d find the lock on Peppa’s unlocked door and the key on the floor so they’d know I locked her in and it wasn’t her.”

A story full of honesty and strength and the hardships even a little girl will go through to keep her family together.

I do highly recommend it but beware of a great amount of very uncomfortable subject matter.

If anyone reads or has read this book I would really love to hear your thoughts and opinions on it as I a very difficult time figuring out what to do with this book and I’d love to hear what others thought… It would make an amazing book club read!

Onwards to my Apology

I’m sorry, but there is no drink to pair with this one at this time… I have some ideas and feel free to check out the Mountaineer Margarita from Wild and Wonderful Tailgating, but as some of you may have noticed I haven’t been posting or commenting over the last couple of days which is very unlike me. I have been sick and unable to make my drinks. I also didn’t feel comfortable pairing this one with a drink due to the subject matter. I hope you all understand!!