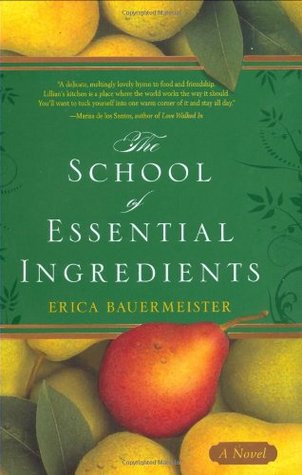 I figured that I should start to do Throwback Thursday’s as a “Ghost of Books Past” I’m going to re-read books that I loved and hope that I still love them!! *fingers crossed*

This review goes out to my Father. This is one of his favourite books and he’s been bugging me to put up a review of it since I started this blog so, “HERE I GO DAD! I HOPE I DO YOU PROUD! ….I’LL EVEN DOUBLE CHECK MY SPELLING AND GRAMMAR FOR YOU!” (He’ll still find something….)

Reminiscent of Chocolat and Like Water for Chocolate, a gorgeously written novel about life, love, and the magic of food.

The School of Essential Ingredients follows the lives of eight students who gather in Lillian’s Restaurant every Monday night for cooking class. It soon becomes clear, however, that each one seeks a recipe for something beyond the kitchen.

Students include Claire, a young mother struggling with the demands of her family; Antonia, an Italian kitchen designer learning to adapt to life in America; and Tom, a widower mourning the loss of his wife to breast cancer. Chef Lillian, a woman whose connection with food is both soulful and exacting, helps them to create dishes whose flavor and techniques expand beyond the restaurant and into the secret corners of her students’ lives.

One by one the students are transformed by the aromas, flavors, and textures of Lillian’s food, including a white-on-white cake that prompts wistful reflections on the sweet fragility of love and a peppery heirloom tomato sauce that seems to spark one romance but end another. Brought together by the power of food and companionship, the lives of the characters mingle and intertwine, united by the revealing nature of what can be created in the kitchen.

“Lillian loved to watch her students at this moment – they were elements that would become more complex and intriguing as they mixed with one another, but at the beginning, placed in relief by their unfamiliar surroundings, their essence was clear. A young man reaching out to touch the shoulder of the still younger woman next to him – “What’s your name?” – as her hand dropped to the stainless-steel counter and traced its smooth surface. Another woman standing alone, her mind still lingering with- a child? a lover? Every once in a while there was a couple, in love or ruins.

Lillian’s students arrived in a variety of motivations, some drawn by a yearning as yet unmet to hear murmured culinary compliments, others who had come to find a cook rather than become one. A few participants had no desire for lessons at all, arriving with gift certificates in hand as if on a forced march to certain failure; they knew their cakes would always be flat, their cream sauces filled with small, disconcerting pockets of flour, like bills in your mailbox when you had hoped for a love letter.

And then there were those students who seemingly had no choice, who could no more stay out of the kitchen than a kleptomaniac could keep her hands in her pockets. The came early, stayed late, fantasized about leaving their corporate jobs and becoming chefs with an exhilarating mixture of guilt and pleasure. If Lillian’s soul sought out this last group, it was only to be expected, but in truth, she found them all fascinating. Lillian knew that whatever their reasons for coming, at some moment in the course of the class each one’s eyes would widen with joy or tears or resolution – it always happened. The timing and the reason would be different for each, and that’s where the fascination lay. No two spices work the same.”

This is a quote that I found that I think best describes Lillian. She may be the main protagonist of the story. With a mother who raised her with her head in the books,

“In this new life, Lillian’ s mother’s face became a series of book covers, held in place where eyes, nose, or mouth might normally appear. Lillian soon learned that book covers could forecast moods much like facial expressions, for Lillian’s mother swam deeply into the books she read, until the personality of the protagonist surrounded her like a perfume applied by an indiscriminate hand. Lillian was never sure who would greet her at the breakfast table, no matter that the bathroom, the hair, the feet were always the same. It was like having a madician for a mother, although Lillian always suspected that the magicians she saw at birthday parties went home a d turned back to portly men with three children and grass that needed mowing. Lillian’s mother comply finished one book and turned to the next. “

And, possibly because of this, she goes through the book almost like she’s at the zoo watching an exhibit. Okay, that sounds bad…

It’s like she is making a souflee. She puts all of the ingredients together but knows that after that point she can only put it in the oven and wait because, if she opens the door too early or keeps checking on it, she’s just going to ruin it. It’ll come together on its own, in its own time. This is how she treats people. Get them in a room together and things will happen as they happen.

All of these strangers have their own different trials in life and yet they are brought together by the binding forces of the universal language of food. They may have come to the class initially to simply learn how to cook, but they may wind up leaving with something far more nourishing.

Speaking of the language of food. This is one of the things that I love most about this book. Erica has such a beautiful way with words. Her phasing had me tantalized and hungry for more…. and hungry for food!

“The polenta was a cauldron of summer, vibrantly gold against the black of the pot. Carl was stirring with a long-handled wooden spoon with a hole in the center while Tom dropped in small bits of cheese that left white comet trails as they melted into the moving yellow mass.”

“She gently tossed the garlic. It landed in the bowl created by his palms, its outer layers crackling like a secret, the weight both heavier and lighter than he had anticipated.”

Each chapter focuses on the story of a different character in the class, slowly unwrapping their lives and circumstances like the secret that garlic held. Each story different, and yet the same. Characters who may not have lost the same things and yet the loss of memories and the loss of a loved one can still be the sort that brings two people together, or the fact that you are trying to find yourself as a child growing to adulthood doesn’t mean that you can’t connect with the mother trying to find her identity out side of being a mother.

I think Charlie says it best, “We’re all ingredients, Tom. What matters is the grace with which you cook the meal.”

What is your Essential Ingredient? Let me know in the comments!

Pick up your copy now!!

The School of Essential Ingredients is Best Served With

“Lillian’s mother took the apple and absentmindedly pressed its smooth, cold surface against her cheek.

“It feels like fall,” she commented, and bit into it. The sharp, sweet sounds of the crunch filled the air like a sudden burst of applause and Lillian laughed at the noise. Her mother looked up, smiling at the sounds, and her eyes met her daughter’s,

“Why Lillian,” she said, her voice rippling with surprise, “look how you’ve grown.”