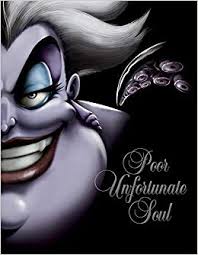 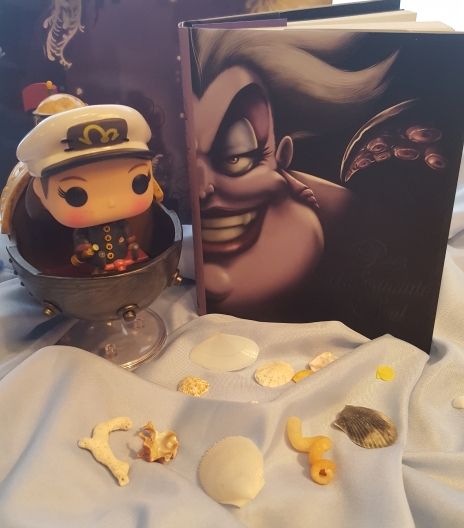 The third novel in Serena Valentino’s (Fairest of All, Beast Within) “VILLAINS” trilogy, featuring the story of the Little Mermaid from the perspective of the sea witch Ursula.

I had such high hopes for this one! It sounded fantastic. A “Wicked” style story of “The Little Mermaid” from Ursula’s perspective. YES, PLEASE!

Unfortunately, it fell a little short. There were characters I didn’t understand, Princess Tulip (who made no sense in the story, and held no part in pushing along the story of Ursula…. it was actually based more off her than Ursula!), and the Odd Sisters, who I also didn’t understand.

I wish that I had purchased this book in an e-format so I could how many times the word “hate” was used in the book. Literally, get a copy and open it to ANY PAGE, I have a feeling you will see it there,

“Hate. Her magic was infused with it. And in that hate was a deep penetrating sorrow.”

“Now our hate will rain down on her like a thousand nightmares for betraying us!”

It also used too much from the movie, actually quoting songs and such word for word a little too much to the point of getting a little boring.. Or just making me really want to put down the book and watch the movie (which is probably what Disney wanted since they seemed to have a hand in publishing it!)

I DID really like Ursula’s backstory and the reason that she was so evil. It really made more sense hearing how the poor Sea Witch had been so wronged by her brother Triton, and it made me feel for her!

All in all though, it was just written a little too simply for me, and just had a few too many elements that didn’t need to be there. I hoped for more focus on Ursula.

But I Digress……. Disney Princes

This book DID remind me of a question I’ve always had. Maybe someone out there hasan answer for me!

Why is Eric the only Prince with a name??

WHAT’S UP WITH THAT??

Let me hear your opinions in the comments below!

8 thoughts on “Pisces Month: Poor Unfortunate Soul (A Tale of the Sea Witch) by Serena Valentino – But I Digress…Disney Princes”