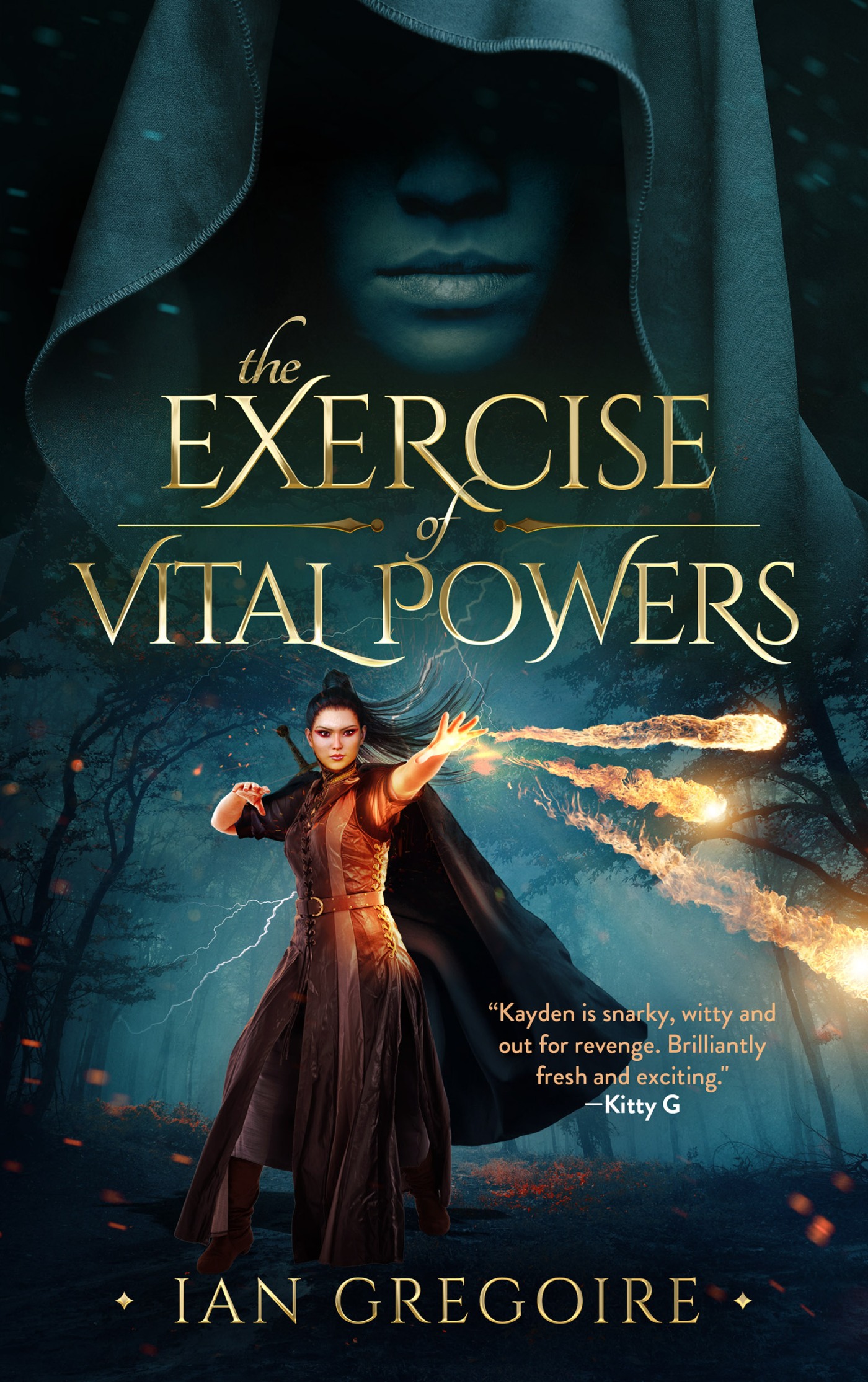 I am so excited to be part of this cover reveal today. I CAN’T WAIT to check out this book!!

Be sure to add it to your Goodreads lists HERE to remind you to pre-order!!

The Exercise Of Vital Powers is due to go on sale from Monday 2nd July 2018, in ebook and paperback editions. Pre-orders will be open in June via all the usual online retailers

Some Lessons Must Be Learned The Hard Way

Since its inception, The Order has been dedicated to the prevention of the misuse and abuse of magic. For seven decades this mandate has guaranteed peace and stability throughout The Nine Kingdoms. But a potential threat to the peace has emerged, and its source is much closer to home than the leadership of The Order may realise.

Arrogant, manipulative, confrontational and angry. Undesirable qualities in a person at the best of times, but more so in a young woman born with the power to bring kingdoms to their knees. Kayden Jayta, precocious apprentice of The Order, is all these things and more, yet wholly unwilling to acknowledge and rectify her many troubling traits.

Unbeknown to anyone, Kayden’s resolute determination to join the ranks of The Order is born of a secret that puts her priorities at odds with the precepts of the organisation, setting her inexorably on a collision course with the most powerful institution in The Nine Kingdoms.

If Kayden is to be dissuaded from walking the path she has chosen, averting tragic consequences in the process, two unanswered questions must be answered: What is the dark secret guiding Kayden’s actions? And, why has a legendary figure within The Order, with a secret of her own, taken undue interest in Kayden’s future?

Ian Gregoire’s debut fantasy novel was self-published with no fanfare in the spring of 2017. On a whim, he entered the book into the SPFBO competition organised by Mark Lawrence two weeks later, and was just as surprised as everyone else when The Exercise Of Vital Powers was selected as Kitty G’s first semi-finalist. The book subsequently garnered a number of positive reviews, culminating in a place on the longlist of nominations for Best Self-Published Novel in the inaugural BookNest Fantasy Awards.

Originally written and published as a stand-alone novel, the soon to be released second edition of The Exercise Of Vital Powers is now book one of a five book series called Legends Of The Order. Readers who missed out the first time around will now have the opportunity to acquaint themselves with the book’s precocious protagonist before she returns in the sequel, coming soon

Some Praise for the book

I didn’t include all because I want you all to GET READING THE BOOK!!

“Gregoire has done an amazing job of creating a feeling of tension throughout, while leaving us guessing as to what will happen next, or even how the outcome will turn out.” Dianne (Tome Tender)

“I don’t know what I was expecting, really, but I don’t think I was expecting such an engaging, well thought out story from a self-published debut novel I had never heard of before…” Kristen (Superstardrifter)

The reclusive Ian Gregoire is a taciturn introvert residing somewhere in London, where he was born and raised. Of all life’s diversions, reading and writing are the only ones he ever deemed worthwhile enough to be passionate about. This eventually led to his belated decision to pursue his true calling in life as a fantasy and science fiction author. His debut novel, The Exercise Of Vital Powers, is just the first of many books he intends to inflict upon an unsuspecting world.

On the occasions he steps out of his reading and writing comfort zone, Ian has a fondness for computing, melancholy music, retro gaming, and Asian Cinema. Ian also loves peace and quiet, something that is in frustratingly short supply in his life.

Ian can currently be found (or not) living the life of a hermit somewhere in London, continuing his quest to become your future favourite fantasy and science fiction author. To find out more about him and his ongoing publishing journey be sure to visit his official online hangouts.

Check out more on Ian Gregoire!