Between the fast-paced New York City, a rural Mississippi town, and a charming Pennsylvania college campus filled with secrets, two young girls learn the consequences of growing up too quickly. Struggling to survive in a claustrophobic, unforgiving world, they embark on a journey to overcome all the pain, disappointment, and horror of their experiences.

Amalia Graeme, abused by her mother for most of her life, longs to escape her desolate hometown, connect with others, and fall in love. Contemplating an impending loss of innocence and conflicting feelings between her boyfriend and the dangerous attraction she’s developed for an older man, Amalia suffers devastating, life-altering tragedies. No matter where she turns, someone or something always steals her hope of finding happiness, protection, and love.

Brianna Porter, a sassy yet angst-ridden teenager raised in New York City, yearns to determine her life’s true purpose, conquer her fear of abandonment, and interpret an intimidating desire for her best friend, Shanelle. All the confusion stems from desperately needing to find the father whom her mother refuses to reveal, but an unexpected discovery of a journal leads Brianna to a shocking revelation about her missing parent. Unfortunately, by casting the net to find him, she’s unleashed a tragic history that was meant to stay buried and might now completely change everyone’s futures.

Through alternating chapters set two decades apart, each girl’s plight unfolds revealing the parallels between their lives and the subsequent collision that is bound to happen. In an emotional story filled with mystery, romance, and suspense, fate intervenes forcing someone to make a dreadful decision that will leave permanent scars.

“Life just happens sometimes. You can’t predict it. You don’t know where it will drop you off unexpectedly. You only get to pick up the pieces when it’s all said and done.”

Fist of all, where to start?? I’m SO SAD it took me so long to read this book! (I have a feeling that I’m going to be saying that a lot in the near future…

If there is one thing that James excels at, it’s writing vivid characters. His characters are always real, flawed, and they always make you feel for them.

Now, I’m not saying he makes you like them. Take Amalia’s mother for example; in my notes I tagged her as a “dirty hag witch” and Mr. Pollardo who just has a series of !!!!!!! And a lot of language that shouldn’t be repeated in a post!

Then there was Shanelle. She was such an amazingly supportive character! Ok, so she was too young for me. But, if she got turned down one more time I was going to leave my man, jump into the pages, and take her for myself.

James evoked such emotion in my with his characterization. I loved the parallels and yet differences between Amalia’s life and Brianna’s life; the daddy’s girl and the mama’s girl, the girl trying to find her sexuality in a Christian family who thinks everything makes you a dirty whore to trying to find your sexuality in a world that maybe isn’t ready for what you think you want. They were different, yet, still relatable to many growing up.

The couple of things that may have got to me a little bit were Brianna’s constant whining about not having a father. She seemed to only picture a father as this loving person that she would eat iced cream and share her secrets with…. I know that it was detrimental to the story (it’s really a silly thing to complain about) but, it made me want to shake Brianna and scream “NOT ALL FATHER’S ARE PERFECT AND LOVING, AND YOU HAVE YOUR MOTHER AND LENNY. STOP BEING SELFISH AND GREEDY AND GET OVER IT!!”

The second thing was a conversation towards the end between Amalia and her roommate, Rachel, in which the emotions just felt little forced and random. It was almost as though James was trying to push for the ending at that point and it just got a little less organic.

…. Oh, and James ALMOST lost a star for mention of Nickelback in his book… But, I’m not petty enough for that. 😉

Other than that, this book was AMAZING and I’m so happy it wound up being my first pick for my failed read-a-thon (thank you, hat!) it was a touching and emotional rollercoaster!

Pick up your Copy

Funny enough the author, James J. Cudney IV just put up a post informing everyone how best to contact him.

Father Figure is Best Served with a Panty Dropper Martini 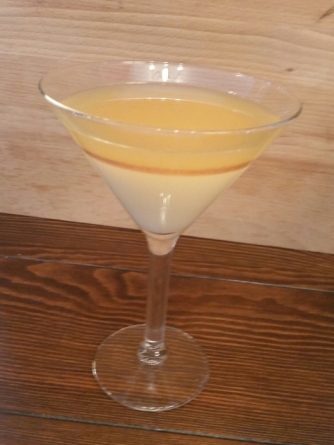 So, I came up with this way back in April… long before I had actually read this book. It was a post by the amazingly hilarious wonderful Shalini where she interviewed the author that inspired this drink. At the time James laughed and told me that I had (completely unintentionally) come up with the best drink for the book…. HE WAS SO RIGHT!! So I’m happy to share this amazing drink again!

Directions (my made up directions, at least!!)

It was great meeting the crew from @fenelonbrewco and trying their beer! I can't wait to visit again to try their food. . . #craftbrew #craftbeer #kawarthalakes #kawartha #fenelonfalls #fenelonfallsbrewingco #drinkbeer #beertasting #beerflights
My first review and pairing of 2020! Continuing my journey with Leila and the Red Barn crew in "Death in Smoke" by @barbaraelleauthor. This book is Best Paired with a Total Eclipse cocktail. For review and recipe, head to thebookwormdrinketh.com or the link in my profile! . . #booze #books #bookstagram #drinkup #booksnbooze #booksnboozers #bookreview #bookreviews #boozers #book #reader #mystery #mysterybooks #cocktail #darkrum #totaleclipse
Nothing says Tuesday night like Bingo and sparkling wine with your family! @canoefmradio .... Some technical difficulties this week. But, time with family is more important. . . #sparklingwine #minden #haliburtonhighlands #haliburtonlife #cottagelife #winterlife #bingo #canoefm #mindenhills #tuesday #rollin
Feeling Dapper in my new shoes @lockstreetbrewco. Happy Full Moon, Everyone. LET THE CHAOS BEGIN!! 🍻🌕 . . #fullmoon #chaos #beer #craftbeer #happyfriday #newshoes #feelingdapper
Fantastic night out with some great ladies to ring in the New Year a little early! @lockstreetbrewco I'm so grateful to have such amazing, strong women in my life! . . #girlsnightout #newyears #newyear #cheers #nightout #wineoclock
🎶Take another little piece of my heart now, baby... 🎶 . #missingpiece #themissingpiece #jigsawmadness #puzzles #jigsawpuzzle #jigsawpuzzles