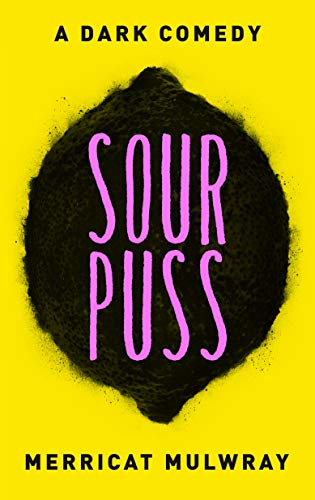 Sourpuss is a blistering satire of the depraved and entitled culture that pervades college campuses.

She’s sprinting through her senior year obsessed with winning a spot on the US Olympic track team. But she runs straight into a hurdle in the form of fraternity president Graham Patterson, an intern assigned to help her recover from an injury – one she blames on him.

Once Graham’s therapies begin to work, Mallory pretends to fall in love but traps herself in her own scheme and tailspins deep into his debauched world. When a scandal erupts which threatens to shatter her Olympic dreams once and for all, Mallory must finally face the dark truth she’s been running from since freshman year.

In the style of a ’90s dark comedy flick, Merricat Mulwray’s debut brings an insightful and humorous perspective to the reckless behavior college students perpetually get away with. Mallory, herself a flawed heroine, is backed by a self-serving cast of athletes, party girls, townies, and fraternity brothers so hilariously dark that the book will leave you wondering if anyone ever gets what they deserve.

Mallory is a “do as I say. Not as I do” bitch. She thinks she is so great and better than everyone else. But, she doesn’t even give anyone else a chance. She even treats her so called, “friends” like trash. She thinks of them more as her “fans”.

She’s also whiny. She’s so strong and independent, then a little playgirl magazine falls out of her bag and all of a sudden she’s crying like an anime heroine??

And, that’s not the first time! Good God… The crying. And the hypocrisy! “I hate all these frat whores” (next chapter she IS the frat whore) “keg stands are for frat britches!” (two seconds later… Who’s doing a one handed keg stand?) I mean, honestly I don’t have to keep going on and on about Mallory. There wasn’t a likeable character in the whole book! Ok. Maybe Ken. Ken was actually acceptable. ONE semi-likeable character.

It was supposed to be a dark satire modeled off 90s college life….. well, as someone who was in my teenage years in the 90s. I just didn’t get it. This was no Mallrats for me.

Now, don’t take everything I’m saying to heart. Maybe I just wasn’t the right demographic for this book. I think the author was trying to go for this generation’s “Dazed and Confused”…. But, I’m in my 30s and I DON’T UNDERSTAND this generation. Actually, some of what they said in the book was just gibberish to me.

“Damns, oh snaps and you’re gonna let her dog you like that, fam?”

“And you weren’t complaining about my talents when I was taking your measurements by the wolf the other night,” replied Callie. “Girl, you know there’s a time for work and there’s a time for play,” he half whispered. “Ain’t I right?”

The plot was thin, the narrative was confusing and juvenile. But, I can’t speak for others because maybe I just didn’t get it?

Try it out for yourself!

Merricat Mulwray is the collaboration of two sisters. They live in Los Angeles where they hatch plans and develop schemes, sometimes these turn into novels.

Sourpuss is Best Served with a Sourpuss Shooter

20 thoughts on “Sourpuss by Merricat Mulwray”

Spent Valentine's Day with 2 of my favourite people. Thank you to @wolfoflockstreet and @jakethejakemanfoster for a fun road trip. And, thank you to @innocentebrew and @blockthree for letting us all get in your way to check things out and drink your wonderful beer! Hope everyone had a great Valentine's Day! . . #valentinesday #valentinesday2020 #roadtrip #roadtrippin #brewtour #beerflights #beer #breweries #craft #craftbeer #craftbrew #waterloo #beertasting
Finished a great Valentine's Read! Headliners by @_LucyParker is the perfect mix of humour, steam and mystery, and pairs beautifully with this Dark N Stormy w/ Jamaican Ginger Beer from @CanalsideSoda! Review & recipe at http://thebookwormdrinketh.com or through the link in my profile . . #cocktailrecipe #valentinesday2020 #ValentinesWeek #valentines #valentinesreads #romance #romancebooks #headliners #lucyparker #books #bookstagram #drinkup #booksnbooze #booksnboozers #bookreview #bookreviews #boozers #book #reader #bookwormlife
Happy #MakeAFriendDay!! It's my only day off. So, these are the friends that I want to spend my time with! . . #book #booklove #bookwormlife #booklover #booksnbooze #booksnboozers ##bookstagram #bookstagrammer
Moving up in the world. From bar office to an office WITH A WINDOW!! . . #corporateladder #movingup #movingupintheworld #officelife #brewerylife #window #lookingout #daylight
Even Tuesday can be a night to celebrate!! Thank you @blue.pomelo for a wonderful Christmas present. I finally opened it, and I already poured you a glass to come and enjoy! . . #celebrate #tuesday #tuesdaymotivation #christmasallyearlong @bigheadwines #girlsnightin #sparkling #sparklingwine #celebratelife
I have some book mail thank you's to catch up on!! I recieved this wonderful book from Scott Erickson and I can't wait to get started!! My review will be up in February. . . #booze #books #bookstagram #drinkup #booksnbooze #booksnboozers #bookreview #bookreviews #boozers #book #reader #readersofinstagram #bibliophile #satire #bookmail