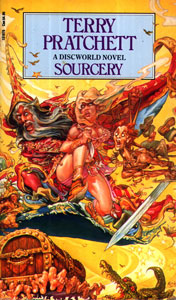 When last seen, the singularly inept wizard Rincewind had fallen off the edge of the world. Now magically, he’s turned up again, and this time he’s brought the Luggage.

But that’s not all….

Once upon a time, there was an eighth son of an eighth son who was, of course, a wizard. As if that wasn’t complicated enough, said wizard then had seven sons. And then he had an eighth son — a wizard squared (that’s all the math, really). Who of course, was a source of magic — a sourcerer.

Another mis-adventure with Rincewind. He’s like the Don Quixote of the wizarding world…. Except, instead of quixotically running AT windmills, he’s usually running AWAY from them (and the windmills Rincewind would somehow get involved with would probably have big teeth and be trying to kill him), and as he runs away from them he would trip, do something stupid and somehow save the world.

Rincewind is just so bumblingly fun that he has to be one of my favourite characters. The more he DOESN’T understand, the more he seems to get right in his life,

“It has begun, said the hat, from its box on the deck.

“What has?” said Rincewind.

The rule of sourcery.

Rincewind looked blank. “Is that good?”

Do you ever understand anything anyone says to you?

Rincewind felt on firmer ground here. “No,” he said. “Not always. Not lately. Not often.”

“Are you sure you are a wizard?” said Conina.

“It’s the only thing I’ve ever been sure of,” he said, with conviction.

I always talk about Pratchett’s amazingly whimsical way with words, and this instalment was no exception! I love when he makes fun of known tropes or content in other literature (like referencing a possible doorway to another world in Rincewind’s wardrobe that will never be found due to the overwhelming stench of mothballs) or even reference to popular cartoons,

“The wizard raised an eyebrow, yellow fire sprang up around the shellfish salesman, there was a noise like tearing silk, and Koble had vanished. All that was left was his boots, standing forlornly on the cobbles with little wisps of smoke coming out of them.

No one knows why smoking boots always remain, no matter how big the explosion. It seems to be just one of those things.”

Of course there is also the Luggage…. funny how something that is constantly described as “maniacal” and “homicidal” can be SO ENDEARING!! The luggage becoming heartbroken and wandering on a drunk walk about was adorable!!

With some fun new characters like Conina, Nijel and Creosote, this book was another winner!

Check out the other Blogger’s who joined in on the Read-a-Thon this month!!

Confessions of a Serial Reader Elnade

Kathy Pages Below the Vaulted Sky

Sourcery is Best Served with a Snake Bite Shot

One thing that I noticed in this book were the constant references and allusions to snakes. Coin’s staff is always described as snake-like,

“I’ll remember, um, not to,” said Spelter firmly. “What did it feel like?”

“Have you ever been bitten by a viper?”

“In that case you’ll understand exactly what it felt like.”

There were also a lot of other references to the river “slithering” and others. 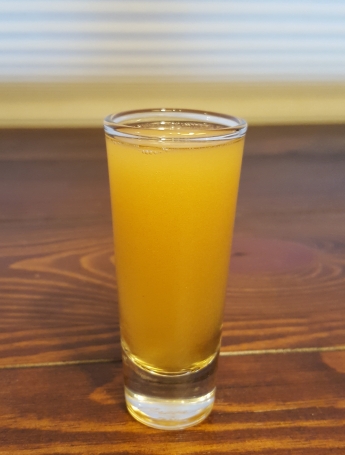