Thanks for joining me for the Blog tour for the 3rd installment of the “To Catch a Thief” series by Kay Marie (or Kaitlyn Davis). If you missed my reviews on the first 2 in the series, please check them out! It’s definitely worth your time!!

Agent Leo Alvarez is on his way to Hawaii when his partner calls in a favor—the mob is after a pastry chef in NYC, and he’s the only one who can get to her in time. With his dreams of Mai Tais and sandy shores ruined, Leo rushes to her rescue. But when he arrives at her apartment, he’s greeted by an upturned nose and an icy blue stare. This damsel in distress doesn’t need saving. Good thing he’s a retired marine who never backs down without a fight.

After a childhood racked by scandal, McKenzie Harper has learned to loathe surprises. So when a strange man knocks on her door, interrupting her morning routine, she has no choice but to politely shut it in his face—no matter how deeply his hazel eyes might pierce. She has places to go, pastries to bake, and promotions to secure. Or she did, until three masked men kidnap her and throw her into the back of a van… Suddenly, that white knight doesn’t seem so scary.

He’s a cocky Fed with a killer smile. She’s an uptown beauty with a biting tongue. If they want to survive, they’ll have to learn to work together—assuming they don’t kill each other first.

Another adorable installment in this series full of fast paced action and steamy romance! HOW CAN YOU GO WRONG??

This was definitely another triumph and I really love how Kaitlyn really brought this one together! Not only did she do an amazing job of tying up lose ends and really allowing you to get to know the last couple of wonderful characters in the series,and totally falling in love with their stony sarcasm,

“You’re all right.”  A heavy breath pushed the words out in a rush.

“Depends on the definition.”

He arched a brow, feeding off her combative tone. “You’re alive.”

“Safely in the middle of nowhere.”

“Despite your best efforts,” she drawled again.”

She also had this story running simultaneously with the second book of the series. So, it was really fun to see what everyone was up to when all of this was happening!

McKenzie and Leo are both hilarious characters! McKenzie’s “Ice Queen”ways definitely reminded me of myself at times!

“I’m not sure what you overheard—”

“Us ice queens aren’t known for our hearing,” she drawled, cutting him off. The Fed had the decency to wince.

“I’m sorry,” he continued, stepping closer. He held his hand aloft as though begging for a moment to explain. “I shouldn’t have called you that.”

“Of course he hadn’t read her mind. Of course he wasn’t overanalyzing everything that had happened between them. He was a guy. They’d gotten drunk. They’d had sex. End of story and back to the mission. He just wanted to get her home safe so he could return to his normal life.”

With Russian Mobsters, family issues, PTSD and some really cute and sexy romance HOW CAN YOU SAY NO??

Off the Grid is Best Served with a White Russian

Because, it had to be involved in this series somehow!! Read the books to find out! 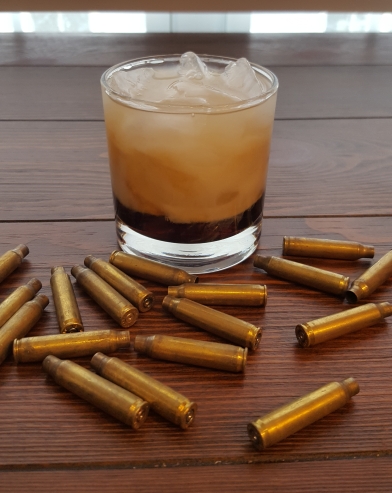 55 thoughts on “Off the Grid by Kay Marie (Kaitlyn Davis)”