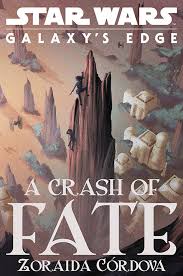 I’m happy to join Rockstar Book Tours and  Zoraida Córdova on this promotional tour of A Crash of Fate, Book One in the Galaxy’s Edge Series!!

Izzy and Jules were childhood friends, climbing the spires of Batuu, inventing silly games, and dreaming of adventures they would share one day. Then, Izzy’s family left abruptly, without even a chance to say goodbye. Izzy’s life became one of constant motion, traveling from one world to the next, until her parents were killed and she became a low-level smuggler to make ends meet. Jules remained on Batuu, eventually becoming a farmer like his father, but always yearning for something more.

Now, thirteen years after she left, Izzy is returning to Batuu. She’s been hired to deliver a mysterious parcel, and she just wants to finish the job and get gone. But upon arrival at Black Spire Outpost she runs smack into the one person who still means something to her after all this time: Jules.

The attraction between them is immediate, yet despite Jules seeming to be everything she’s ever needed, Izzy hesitates. How can she drag this good-hearted man into the perilous life she’s chosen?

Jules has been trying to figure out his future, but now all he knows for certain is that he wants to be with Izzy. How can he convince her to take a chance on someone who’s never left the safety of his homeworld?

l climbed the rock face, higher and higher. She
scraped her knee only once, and the cut had already
begun to scab over as they neared the top. The frilly
dress she wore was covered in sweat and dirt. Her
father would be angry with her. He’d sewn in extra
panels only the day before because she’d had another
growth spurt practically overnight.
“Come on, Jules!” she shouted. “We’re almost
there!”
“No fair, Izzy,” the boy called back. Loose pebbles
fell over his head, and though he’d convinced himself
that he wasn’t afraid of heights, he made the mistake
of looking down, only for a moment. His palms were
sweating and his belly flip-flopped from the fear of
falling. If he wanted to fly, he’d have to get over his
fears, and to do that he needed to conquer them. The
trouble was, it was easier to think rather than do, and
the doing was proving rather difficult. When the boy
looked back up, sunlight beamed in his eyes, but he
could still see the girl was already a meter or two ahead.
He grunted and pushed himself to climb faster. “Your
limbs are longer. That’s practically cheating!”

“Practically but not exactly,” she said.
Izzy Garsea held on to the nooks and crannies in the
jagged rock. The suns beat overhead, relentless during the dry season. Not a single cloud provided shade,
but they’d covered their heads with the scarves Jules’s
mother had dyed bright blue only the previous week.
Jules had helped, and his fingers were still stained
from accidentally sticking his hands into the dye buckets. Blue and purple freckles dotted his golden-brown
forearms like constellations.
Using a spire like a ladder to get to a cliff shelf, the
boy and girl threw themselves on their backs, victorious smiles painted on their faces. So far away from Black Spire Outpost, it felt like the whole world was
laid out just for the two of them. They could scream
as loud as they wanted and not be reprimanded. They
could do anything.
“One day I’m going to beat you,” Jules said, sitting up.
Izzy giggled and brushed off the pebbles that stuck
to her hands. “Keep dreaming, Jules. I’m taller.”
His big toothy smile was sweet. “You won’t always be.”
Despite being one year older than the girl, Julen
Rakab was still a head shorter. For a six-year-old on
Batuu, it meant he got his allowance stolen quite a bit
by bigger kids and transient travelers prowling for an
easy mark. But the girl never treated him that way. Left alone during the long          stretch of day when their parents had to work, they’d forged a bond. With her, he
was safe—well, as safe as two little ones could be while
rock climbing. But he borrowed some of her fearlessness and followed as far as she was willing to take him.
They settled beneath the shade of gnarly trees that
had somehow managed to retain their leaves. From
their vantage point, the lands of Batuu spread beneath
them, a swell of green and jutting rock. While their
respective parents toiled away on various farms, the
girl and the boy made plans of their own.
They unpacked their snacks from their pockets:
a bag of popped grains he’d made the night before,
dried fruit from the Garsea pantry, caf beans covered
in chocolate she’d snuck from her mother’s hidden tin
of sweets, and a canister of fresh water. They shared
everything, but the boy always gave the girl a slightly
larger bite of fruit, let her have her fill of chocolate
and water.
“Da says I can start working on the farm for next
year’s harvest,” he told her, handing over the metal
canteen.
The girl gasped. Her already wide green eyes went
wider. “But, Jules, who will play with me then?”
“I’ll still play with you, I promise.”
“Not every day. I hardly ever see my parents at
home. They leave at suns-rise, and by the time they come home,                                          it’s dark and they’re too tired to do anything but eat and sleep.”
“Yeah, but they’re old.” The boy shook his head,
hoping to reassure her. “My sister gets home and works
on her knitting to sell in the market.”
“Why can’t you start when you’re older?” the girl
asked.
“Because Da says if I want my own ship, I have to
save for it myself.”
“Your own ship?” she said with wonder. She tipped
her head to look up at the sky. A small luxury vessel was
making its way to Black Spire. The Outpost was only
a little cluster of buildings from that distance, but she
knew how busy it was. Her father had let her go along
with him once. She had drunk in the open shops, the
bustling streets, the smell of roasted meats and nuts.
“Will you take me with you?”
“Of course, Izzy. We can explore new moons and
planets.”

“Check behind the sarlacc tank,” Tap said. He was
still toying with the metal tube. “Hey, Jules, what do
you reckon this is?”
“It’s a fingernail cleaner,” Jules said, trying his best
to keep a straight face. He was positive Dok kept that
finger trap as a prank for his assistants. Who knew the
ancient Ithorian had a sense of humor?
Jules sorted through a bin of standard-issue military uniforms                                                  from the Republic days and a pair of
macrobinoculars with one lens missing. He wished he
understood the way Dok’s mind worked when it came
to storing stuff, b ut J ules didn’t see  that happening
in his lifetime. At the bottom of the bin was a large
leather backpack that looked like it had spent time in
a war zone. Jules wouldn’t have been surprised if it
had, though he hoped the dark stains were oil and not
blood. He packed the spira and slung his arms into the
straps.
“Don’t miss me too much while I’m gone,” Jules said
as he rushed to the front door.
“I won’t have to try too hard,” Tap said, then gasped
when he realized his fingers were stuck i n t he metal
trap. “Hey, Jules! Wait, come back!”
Jules’s mother had always warned that every deed
carried out was returned in kind. So he shouldn’t have
been surprised when he swung the door open to find
a green-eyed girl at the threshold and her fist collided
with his face.

PICK UP YOUR COPY HERE!!

Zoraida Córdova is the award-winning author of the Brooklyn Brujas series and The Vicious Deep trilogy. Her short fiction has appeared in the New York Times bestselling anthology Star Wars: From a Certain Point of View, and Toil & Trouble: 15 Tales of Women and Witchcraft. She is the co-editor of Vampires Never Get Old, a YA anthology forthcoming from Imprint/Macmillan (Fall 2020). Her upcoming YA novels include Star Wars: A Crash of Fate (Disney/LucasFilm 2019) and Incendiary, book 1 in the Hollow Crown duology (Disney/Hyperion 2020). Zoraida was born in Ecuador and raised in Queens, New York. When she isn’t working on her next novel, she’s planning her next adventure.

5 thoughts on “Promo Tour: A Crash of Fate by Zoraida Córdova (Book 1 in Galaxy’s Edge)”