Thank you to Rockstar Book Tours for having me on this tour!

A dying billionaire sends one woman and a cast of dreamers and rivals on a citywide treasure hunt in this irresistible novel by the author of Bellweather Rhapsody.

Tuesday Mooney is a loner. She keeps to herself, begrudgingly socializes, and spends much of her time watching old Twin Peaks and X-Files DVDs. But when Vincent Pryce, Boston’s most eccentric billionaire, dies—leaving behind an epic treasure hunt through the city, with clues inspired by his hero, Edgar Allan Poe—Tuesday’s adventure finally begins.

Puzzle-loving Tuesday searches for clue after clue, joined by a ragtag crew: a wisecracking friend, an adoring teen neighbor, and a handsome, cagey young heir. The hunt tests their mettle, and with other teams from around the city also vying for the promised prize—a share of Pryce’s immense wealth—they must move quickly. Pryce’s clues can’t be cracked with sharp wit alone; the searchers must summon the courage to face painful ghosts from their pasts (some more vivid than others) and discover their most guarded desires and dreams.

A deliciously funny ode to imagination, overflowing with love letters to art, from The Westing Game to Madonna to the Knights of the Round Table, Tuesday Mooney Talks to Ghosts is the perfect read for thrill seekers, wanderers, word lovers, and anyone looking for an escape to the extraordinary.

Geeky, funny, and full of heart, this book checks all the boxes!

The characters really are the star of this book…. ok, games may be a close second. This whole novel is a focus on people and who we are, and games. The games people play (every night and every day. Ha ha!)

But first, some of the characters:

What an absurdly geeky name. So, of course he is the most overtly gay, musical theatre degree holding, trying to hold back from getting drunk on whiskey and cross-dressing at work (but, those Jimmy Choos are calling his name!), kind of guy!

He is sweet and misunderstood (even to himself).Funny, understanding and just looking for love!

“What wasn’t drag, really? Drag was punk, drag was protest, drag was performance and art and fantasy, drag was as many things as there were people who practiced it – though for him, what was drag but a sequined scream? Look at me. Really look at me, please. I dare you to look at me and know me and love me.”

Then there is Bert Hatmaker (Rabbit), my second favourite character. Sweet, open….ok, so everyone has their secrets… is he really as sweet and open as he seems??

“But the other parts,” Rabbit was still saying, “the parts of the job that are actually about the music – watching a kid blow her guts into a trombone and figure out how to move metal, to bend air into sorrow, madness, pain, joy. I love that. I love that. That most of the time, makes up for all the other bullshit.”

“I’ve had some odd things happen to me,” Rabbit said, “over the course of my life. I’ve learned to embrace the mysterious. Because the strange, the extraordinary – those experiences the make you look at the world like you’ve never seen it before, really pay attention to it – the strange changes you. Shows you new things about yourself. About life. Other people.”

Then, funny enough, Tuesday’s parents. They’re not in the book much. But, they just seem like such hilariously weird and complicated people in a good way. They are very “out there”, but at the same time they have very normal old school views on how everyone should get married and settle down to be truly happy. They really do seem like the best kind of parents…. they kind of make me wonder where Tuesday came from….

The thing that stuck with me must was Tuesday talking about her mother’s obsession with online quizzes. Who WOULD I be if I were a Muppet??? Well, this was a real quiz, and I realized why I loved Tuesday’s mom so much… WE WERE BOTH GONZO!!!

TAKE THE QUIZ YOURSELF HERE, AND LET ME KNOW IN THE COMMENTS WHICH MUPPET YOU ARE!!

And, last but not least…. Tuesday. Honestly, I don’t quite know what to think of Tuesday. Her supporting cast was so strong that she almost faded into the background….which, is probably what she would have wanted.

She seemed so strong at first, in the eyes of Dorry and Dex. But, she seems to fade as the story goes on, losing herself in….well, finding herself.

“And Tuesday thought – how – How stupid she was to think she was worth any thing at all. She pushed herself through the revolving door – with a box, so stupid, everything she did was stupid and worthless.”

She’s very calculating and precise when she isn’t losing her mind and too engrossed in her own things to notice anything around her,

“Remember he’s a human. Not a database or a file or a whole filing cabinet to dig through.”

Tuesday sat very quietly and stared at him.

“All humans are filing cabinets,” she said finally. “Some are just better organized than others.”

The mystery was amazing. Vince and Lyle are characters that I would have put above… but, you have to read the book to really grasp how amazing they are. They are people I would like to be friends with because they make their own rules in a crazy, anti-social world (of course, they also have the money to do so!)

If you love puzzles, games, and deep and endearing characters as much as I do, this book is a winner! I predict a movie version of it in the near future!

Pick up your copy Now!! 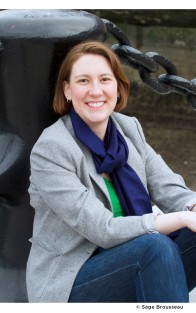 Kate Racculia is a novelist living in Bethlehem, Pennsylvania. She is the author of the novels This Must Be the Place and Bellweather Rhapsody, winner of the American Library Association’s Alex Award. Her third novel, Tuesday Mooney Talks to Ghosts, will be published by Houghton Mifflin Harcourt in 2019.

Kate was a teenage bassoonist in her hometown of Syracuse, and studied illustration, design, Jane Austen, and Canada at the University of Buffalo. She moved to Boston to get her MFA from Emerson College, and stuck around for 11 years. She has been a cartoonist, a planetarium operator, a movie and music reviewer, a coffee jerk, a bookseller, a designer, a finance marketing proposal writer, and a fundraising prospect researcher. She teaches online for Grub Street, works at her local public library, and sings in the oldest Bach choir in America.

Oh, the pain!!! The pain of it all!!! A character in this book EXPLICITLY mentions a Corpse Reviver… which, ironically enough, killed me. I JUST used the Corpse reviver in a recent review!! Check out the recipe HERE because it would pair PERFECTLY!! But, I went with a close second! Still good, and I didn’t just post it a week ago!

My OWN take on a liquefied ghost…believe me, there are MANY!