No female dares spurn the lecherous advances of Sir Henry Cruttendon, 17th Century England’s most reviled nobleman. To do so risks a retribution that would terrify the Devil himself.

But Elizabeth Fiennes is no ordinary woman, blessed with stunning beauty,  intelligence and guile. Coming from an influential family, she believes she is safe.

What she doesn’t understand is that the Earl is determined to satisfy his lust and plans to use the wave of witch trials, fear and superstition sweeping the countryside to force her into his clutches.

And as he springs his malicious trap it triggers a chain of unholy events plunging hunter and prey into a maelstrom of deceit, terror and depravity – leaving them both staring into the face of true evil…

This story may contain triggers for rape and domestic abuse

This book made me SO ANGRY!! which, you would think would make me hate it… But, as I always say, if a book can instill such strong emotion of any sort (as long as it is not due to horrible writing, or vague plot points), then it is a worthy read! With this story is was because of the character of Sir Henry Cruttendon who brought such rage out that I couldn’t stop reading in the hopes that he would get his due. I read as the despair of Elizabeth and Jack poured onto that page, and just HOPED that they would get their revenge!

It was a tough book to read because it involved the humiliation of a strong, beautiful woman at the hands of a man to save her beloved, causing this book to represent the weakness of women in this day. Men had all the power, and they knew how to use it, even without flashing their money around. Their influence was enough to have others cowering. There is no one to stand up for you if he sets his sights on you, and there is no standing up for someone else, as a woman, without giving them what they want.

The characters of Matthew and Thomas were the biggest mystery to me. How do you go from being a penniless actor, to causing the accusations of innocent people for money?? The tortures and pain they inflicted… I get that times were hard for them, but there has to be some blight on their soul to cause them to turn to something so evil for profit and to feel nothing about it! Is it the fact that they weren’t doing the killing themselves that made them feel they weren’t entirely in the wrong?? I wish there was a little more about them, as I felt that the story could have almost been told without them being a part of it.

….All I can say is, that ending. Wow. I just feel like I wouldn’t have seen that coming. I would highly recommend it, for sure!

It’s just a novella,so short and so worth your time, really, and I highly recommend it! 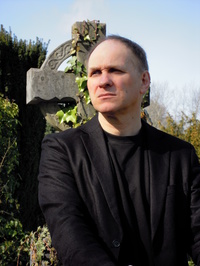 Jay Raven is the author of Gothic chillers and historical horror reminding readers that the past is a dangerous place to venture, full of monsters and murderous men.

He blames his fascination with vampires, witches and werewolves on the Hammer Horror films he watched as a teenager, but living in a creepy old house on the edge of a 500-acre wood may have something to do with it.

To Snare a Witch is Best Served with

It looks like there’s a Tornado coming out of my glass! ….or maybe it’s just me. (or the witch!)

I found this wonderful recipe on All Recipes