It’s a battle to stay in the game! Players must outwit and outlast their rivals as they play from their hand and draw from the deck. The hilarity is in the cards themselves, whether it’s playful perils, comical consequences, or galactic gags. Use an Escape! card to avoid the threat of the inevitable Nooo! cards, however you may need to breathe like Darth Vader or talk like Yoda for the rest of the game. Use other action cards such as Carbon Freeze!, Trust the Force, and Jedi Mind Trick, to outsmart your opponent and disrupt their next move. The last player left in the game wins.

Just shuffle the deck inserting 1 Escape card for each player and 1 less NOOO! card than there are players (i.e. if there are 3 players, have 2 NOOO! cards in the deck.)

Hand 5 cards to each player. Then you just play cards until someone gates the NOOO! card and can’t diffuse it!

Just remember that there will be hilarious consequences to your cards. Some will have you swapping cards with others, some will have you yelling “I’VE GOT A BAD FEELING ABOUT THIS!” Every time someone plays a card!

These are just a few of the hilarious cards… And, I LOVE the art! 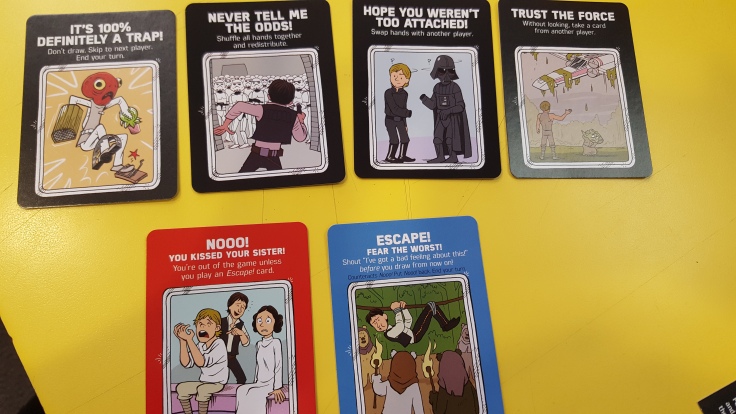 This is a great family game! It’s nice that there are cards that get you to actively participate. I love that the person to go first is “Whoever looks most like a Wookie”  …which ALWAYS seems to be me, of course.

MAY THE FORTH BE WITH YOU!! CHEERS!!